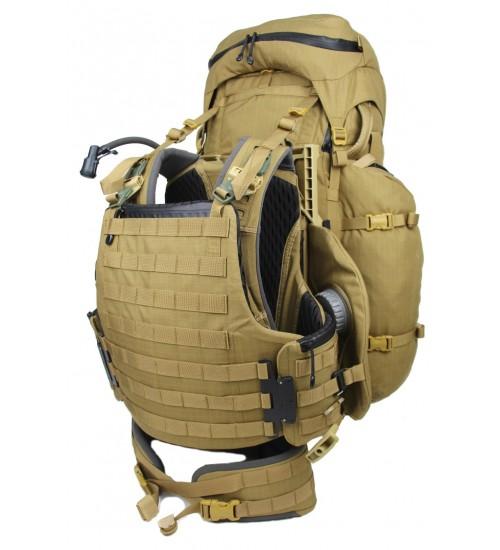 A complete combat system, modular and evolutionary, with its skeleton of portage. Designed by the experience gained on the battlefield by MAROM DOLPHIN, the FUSION system is clearly aimed at the modern infantryman, confronted with a large variety of missions and environments

A complete, modular and scalable combat system, with its carrying skeleton. Designed by the experience acquired on the battlefields by MAROM DOLPHIN, the FUSION system is clearly intended for the modern infantryman, confronted with a large plurality of missions and environments. Take all the elements for a long-term bivouac in the bag, use your combat vest with its ballistic plates and water pockets or go on patrol with just the tactical MOLLE belt with the pockets that contain the essentials!

Faced with an engagement, get out of the bag in a second thanks to the skeleton release system or maintain your freedom of movement - even when climbing - with the skeleton of portage. Composed of a tactical belt with MOLLE bindings - it is the heart of the carrying system and distributes all the weight on the hips (and therefore as close as possible to your center of gravity) to preserve your shoulders and your back - from a carrying skeleton which is worn thanks to its harness and is attached directly to the back of the tactical belt, with a compartment for a ballistic plate, two side water pockets and a specific pocket for carrying a radio station (level of the combat group) - the side arms are equipped with MOLLE, the front facade (which completes the configuration in combat vest), with its compartment for ballistic plate and the MOLLE fastening system over its entire surface, and, finally, d '' a backpack with a capacity of 60 liters - 1 central compartment with access from the top and the bottom, 2 side pockets and its MOLLE bands on the rear surface of the bag.

The Tactical Belt : Large - to ensure optimal comfort and two MOLLE bands over the entire surface - high performance nylon fabric construction, abrasion and flame resistance. The belt incorporates the attachment of the carrying skeleton, to support the weight and freedom of movement of the operator as well as the quick release system. It can be used alone - on patrol for example - by carrying the bare essentials (with the tactical pouches added to the MOLLE bands).

The Portage Skeleton : Attached to the belt and shoulders via its harness, perfectly independent of the bag that it can carry, it is equipped with 2 side water pockets (which can be used alone if necessary) and the distribution hose of the water as well as a compartment fitted out for carrying a radio - combat group level. A textile compartment allows the integration of a ballistic plate to protect the operator's back and spine. Its design ensures (truly) exceptional freedom of movement, in urban areas as well as in the mountains, when shooting or resting. The sides which join the front panel are equipped with MOLLE for the addition of tactical pockets if necessary.

Front Tactical Front : It completes the combat vest (therefore consists of the carrying skeleton and the front panel) with a quick fixing system - which makes it possible to be in combat position or to have access to the operator's torso in the event of a medical emergency - with MOLLE system over its entire surface. The front compartment allows the addition of a ballistic plate - for 360 ° protection once the carrier skeleton ballistic plate is installed.

The high-capacity Tactical Bag : With a capacity of 60 liters, a central compartment - access from the bottom and from the top, optimal for quickly retrieving just what is needed - and 2 side pockets (removable, depending on your tactical configuration), manufacturing (as the entire FUSION system) in ultra-resistant nylon fabric. Ideal for bivouac or hiking missions, enough to carry the survival kit for at least a week. The bag separates from the carrying skeleton in a second via the detachment system integrated into the tactical belt. Its configuration ensures the distribution of the weight, the absence of harness allows a total capacity of movement, the comfort is exceptional even with the maximum load.